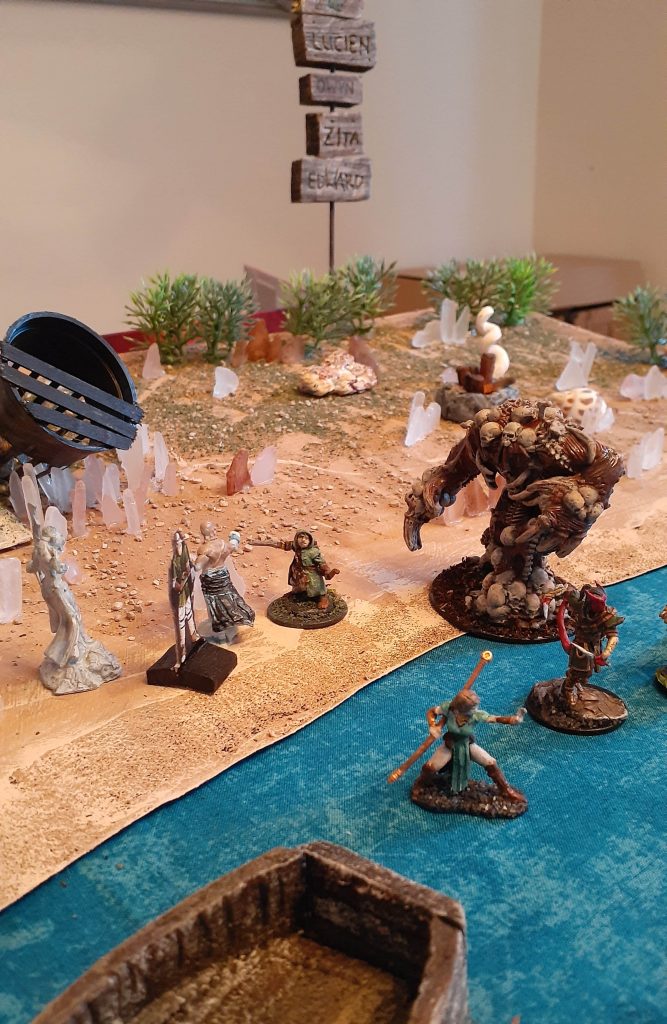 They board the small jolly boat they make their approach to the Bladed Beach at night. They can see a large cage hoisted high in the air, above many sheets of glass. The beach is littered with large glass shards sticking out from the sands. Both moons are a sliver of a waxing crescent, providing little light for those who don’t have darkvision. The water, calm, and sounds carry far.

Shelana, the elvish monk, awaits them. And warns them as they approach that “death is the only thing that they will find on this beach. The faded monks will hunt for Lucien forever. Leave, and let the memory of him fade from your minds.”

They approach closer, and she throws a staff into the water beside them, awakening a bone construct golem that immediately starts to destroy the boat. The party rushes to shore and an intense battle ensues. Shelana uses her ki abilities to devastating effects and giant crabs are hidden under the sand.

Shelana pitches glass at the rope that holds Lucien, he plummets onto the glass and sustains heavy damage, but frees himself from the cage using his magical dagger of retrieval.

Zita takes to the high ground to rain arrows into the bone construct and the cleric uses his mystical weapon spell to attack the creature as it seems impervious to other attacks.

Trull torches the giant crab with flame. Edward uses his superior swordplay to attack Shelana, together with Lucien they take her down and then focus their efforts on the bone construct that has injured the cleric and is pounding away at the sand nearby.

Eventually, after heavy damage to many, and the death of a valuable crew member, Marjorie, they wear down the bone construct and finally destroy it.

Lucien explains more of his past to the players, including his role in the Slaughter of Miranda, a horrible event from 15 years ago that still haunts him, and was the reason for leaving the Faded Monks.

They remove all trace of the battle, hiding it from those that will follow, and taking Shelana’s dinghy, they head back to the ship, with giant crab legs, their missing friend returned, and a little treasure for their efforts.