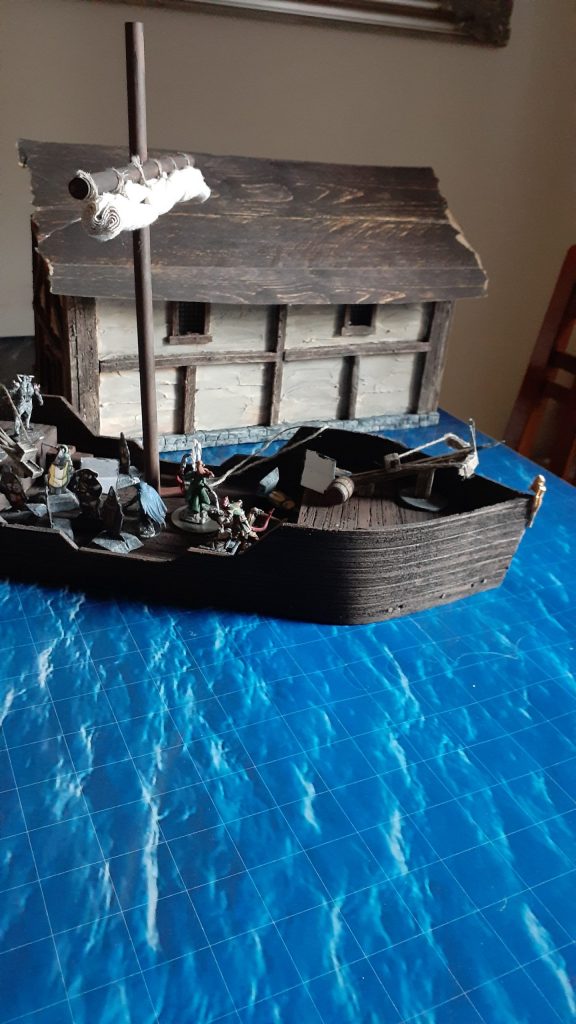 With a slivery white dragon flying in fast from the stern the crew of the Rat Sack try desperately to alert Lucien who had decided to do some skiing behind the ship power pushed by the water elementals.

Confusion reigns as the dragon flies past Lucien and breathes a paralyzing breath that incapacitates most of the deck side crew. Not knowing if it comes in peace, most players hold their attack if it attacks them. The sorcerer Trull, however, holds her firebolt spell if it boards the ship. Which it does when it lands on the cross sails. And she fires her spell for a direct hit on the dragon.

Meanwhile, the remaining crew standing frantically pull in Lucien and Quartermaster Zita tries to alert the Captain. Captain Edward, was unaware of the dragon as he and the navigator were having a roaring argument in the Captain’s quarters.

“Captain, there’s a dragon on the ship.”

“Make sure it doesn’t kill us all so I have time to figure out how we all don’t die here anyway.”

The dragon hit by the firebolt let’s out a horrible roar, inciting fear in those left standing, and then blasts the crew on the bow with a breath weapon of cold. Several die, and the cleric, Owyn, drops to the deck, near death.

Trull notices a figure atop the dragon, blending in perfectly with the skin and colour of the dragon, and casts detect thoughts on the dragon. On the surface of its thoughts it is only thinking of defending its passenger, not on wiping out the crew, so taking a chance, Trull tells the crew to stand down and attempts to communicate with the dragon.

The white dragon, Hraaarghzzz, explains he is there to ask a favour and to grant one. His passenger, Graxx, is a dragonborn native to the elemental plane of air, but is considered feeble as he cannot fly. As a royal son of the mighty ruler of the floating city, it would be in their best interest for the crew to take Graxx on as a passenger. “He is better suited to your world than ours.”

As for the favour he will do for them, “I’ll help you fend off the kraken that has been tracking your ship for days and is about to attack your ship.”

Huge tentacles spring forth from the water and wrap themselves around the ship, grabbing crew and flinging them off the ship.

The party and the dragon attack. The Kraken’s hide and natural immunities prove to be an incredible challenge! With incredible rolls they do manage to damage and destroy a tentacle but another quickly rises from the deep and tries to attack the spellcasters.

Calling the Captain again, he comes out of his quarters. Realizing things have gotten much worse (the cracking and shattering stern wrapped in tentacle a clear sign of the worseness) he and Skyhorm join in the fray.

“Toss me the coin!”, Edward shouts to Trull as he leaps overboard, grabbing the coin in mid-air and dives into the water. He swims directly toward the mouth of the Kraken. Zita commands the water elementals to head down and help Edward. Edward throws the coin of transmutation into the Kraken and the water elementals carry it down, deep into it’s belly. Where (failing its wisdom saving throw) it transforms into a giant armoire and slowly sinks into the infinite deep of the elemental plane of water.

Edward swims back to the Rat Sack, gets on board, and tells the dragon, “As for you, dragon, get the fuck off my ship.”

Owyn, ever the wanderer, asks if he can accompany the dragon back to the floating city. He agrees and Owyn and the dragon, fly away.

“As for you lot, get busy repairing the ship, we’re leaving and need the ship to be ready for anything.”

Days later, Captain Firebrand and Skyhorn have determined they are in the correct place and transport the Rat Sack back to the prime material plane.

The ship warps, and twists in upon itself, and disappears from the space between the elemental planes (and with a natural 20 on the navigation roll) they find themselves within spitting distance of Flotsam, the floating city of pirates.