You can dress a sailor up… Game 10 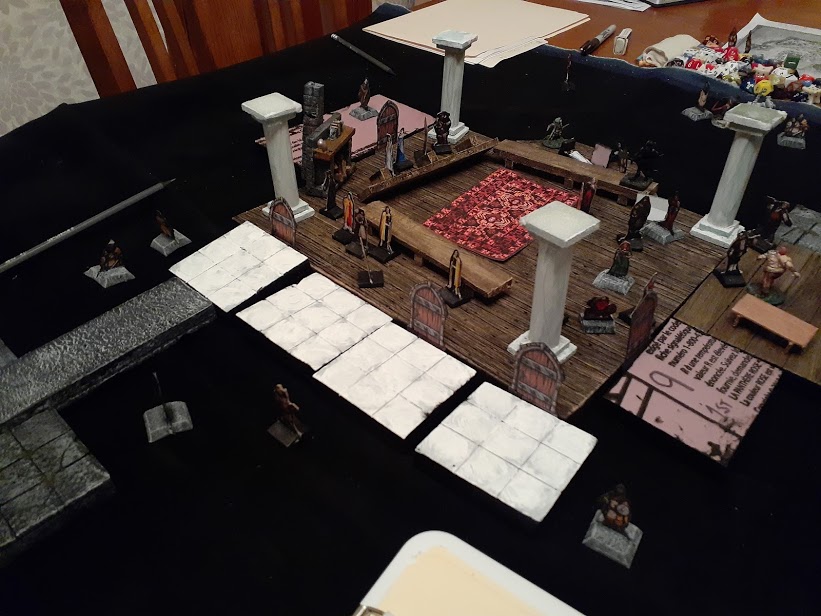 Trull, looking for supplies to add spells to her book, accepted the challenge of Keledek to play the Royal Game of Ur for access to the supplies. If she won, he would sell her the needed supplies, if not, she would work for him for two weeks, and then sell her the supplies. She lost.

I had the players actually play a game of Ur before we got going. Fun.

The other characters used the downtime to get things done, work on the ships, tame a giant wild weasel, and wander the town a little.

A week later the characters were asked to come to the town council, where they were invited to a dinner and dance at the Gellen Primewater mansion. A delegate from the elvish empire was coming to town to check on their progress and the town was hosting a lavish affair in the Delegate’s honour.

It was only a few days before the ball that the Captain asked them about who they were bringing and what they were wearing that a mild panic set in. Rushing to the tailor they found that him and his zombie sewing wife were extremely busy due to the ball and wouldn’t be able to help them. A fair chunk of gold coin changed his mind.

At the ball the characters were introduced and led into the main room of the mansion. The Captain invited Lucien, the only other elf to sit with him at the head table with the councillors and the delegate. A five-course meal and dancing were on order for the night.

An admirer of Trull’s, the head cook, left a note in her third course, for her to come outside – where Edward and others accompanied her. The cook left, dejected that she didn’t share his feelings.

Zita’s companion asked if he wanted to sneak off to find the monster in the dungeon that she’d heard lived in Primewater’s mansion, they took the opportunity while the dance was going on to sneak into Gellan’s study and find a secret entrance to the dungeon level, with Inseron following close behind. There, much to Zita’s disappointment, was Ned.

Ned, and another prisoner, were gagged and tied up, and two other cells were empty. Zita, was not impressed with Ned’s explanation and left him there, but not before accidentally finishing a ritual that would unleash an Invisible Stalker on Ned, who luckily, was still locked in his cell.

Edward, upon re-entry into the main ballroom, knocked over a maid who dropped a large platter. During the kerfluffle, four new serving maids presented the final course to the head table, revealing… darkness. The meals under the cover of the cloches (look it up) were enchanted with darkness spells. Blanketing half of the room with darkness, the disguised serving staff struck at their targets.

Silence also descended in the darkness. Standing beside Lucien in the darkness they quickly pummelled him to unconsciousness. Taking him, they leapt up to the second-story window, and burst through it, fleeing with him.

Inside, once the covers were back on the meals and light returned to the affair, the elf guards stood over the bodies of two monks, and the delegate was nowhere to be seen. During the chaos, one of “serving maids” was struck down by Firebrand and the other by the delegates guards.

The Captain told Edward to “RUN, take back the Fancy Maiden from those who guard it, get whoever’s onboard to sail her, get Lucien before the monks make it to the sea or back to the temple, he’s dead if you don’t. I’ll get the crew and the Fishmonger and meet you at Flotsam in a month. The delegate is gone, and If he’s dead, the elves will reign fire on us all. Now run as if your life depends on it, ’cause it certainly does now.” The Captain, limped to the entrance, looking severely injured and moving very slowly from the battle that happened in the darkness.

Trull, who was outside getting the infinite bag of rats (you’ll have to ask the player why they were getting a bag of rats for a fancy ball, I can’t remember the logic there), tried to strike down the monks who were carrying Lucien. They were too fast and leapt away, one stayed behind to fight and delay Trull and now Edward.

Finally, Zita, his date, and Inseron, came up from the dungeon to see the ballroom in a state of chaos, with two of the elvish guards teleporting away with the bodies of the elvish monks, and the other two interrogating the guests. Tables were overturned, blood splashed on the main tables, councillors yelling at each other, people crying and running away, and second-story windows shattered. With their fellow crew members nowhere to be seen only the injured, stumbling Captain remains but is heading out the door.

Ok, this was a game night where ANYTHING might have happened. There were many story hooks, red herrings, plot ideas and challenges thrown at the players that could have taken them in many directions. I literally had NO idea what the end of the night was going to bring. Seriously, they didn’t have to go to the ball, they had weeks of downtime to explore Saltmarsh, they could’ve decided to do anything. Occasionally, a game like this is needed to see where the storyline is going to go, and now I know what’s coming up next. A chase and a divided party (a DM’s delight!).