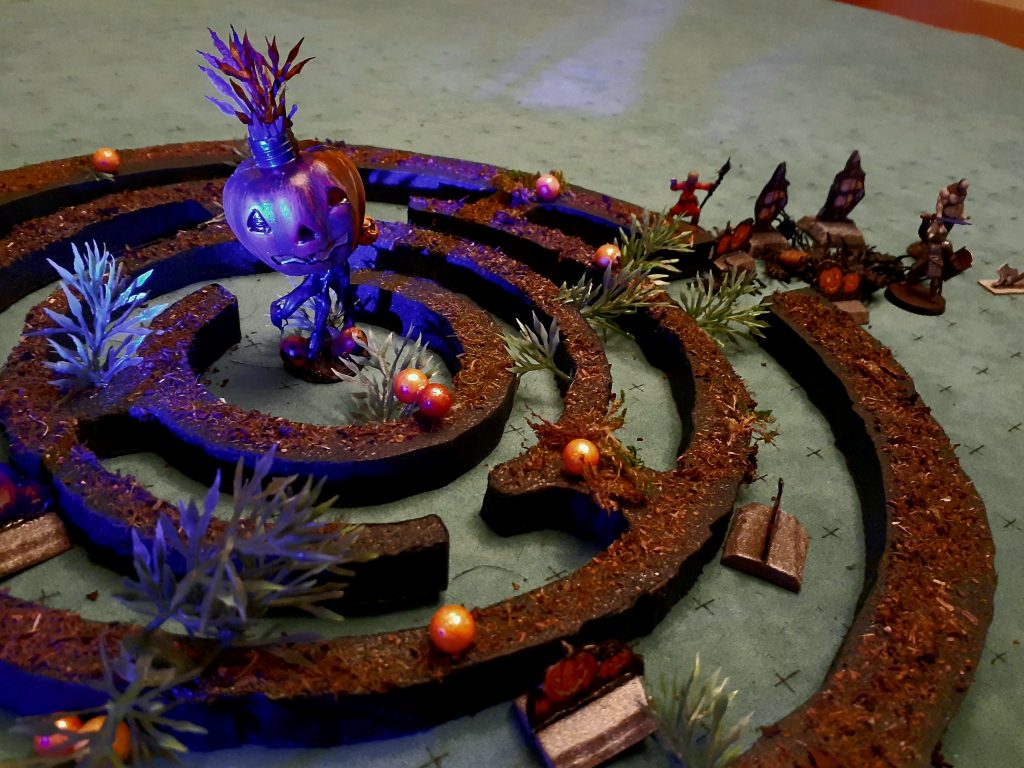 We diverge a little from our main quest to the sound of knocking at the main gates. A small, rather sad-looking child in a tattered yellow tunic is looking for help. He and his friends hid in the hedge maze just in the forest when the castle siege started a few days ago, but his friends are acting really weird and won’t leave the maze now. They’ve survived by eating the vegetables growing all over the maze.

Scumtongue says that on the way is the family graveyard, in which lies his great-grandfather, the first Lord Horvath, who settled and built the castle. He was entombed in a mausoleum, supposedly with his silver bearded axe. The party agrees to get the weapon and then help the children.

The graveyard is quiet, with only the sound of crows from the forest breaking the afternoon calm. They head to the mausoleum at the back of the graveyard where only a Horvath descendant can open the sealed doors. Inside is an ancient corpse on a stone slab. The armour he wears lost to time as is most of the corpse, except for a gleaming silver bearded axe. Still grasped in its boney hands it lays draped across its chest.

The corpse sits up, and in a raspy voice, tells the party it will forever guard the bridge and castle and gives thanks to the party for bringing a body it can use for that purpose. Then a dark shape emerges from the corpse and drifts towards Scumtongue. Raven tries to reason with the ghost, causing it to pause and also tries to turn it away, but the ghost of Horvath will not be swayed and tries to possess Scumtongue, but to no avail. And then tries to possess other party members, but again, their will is too strong. With wild-fire and much hacking, they are able to displace the ghost and send the soul of Horvath to its eternal rest.

At the hedge maze, they see that it has been overrun by pumpkin vines and there are pumpkins throughout the neglected maze. An evil orange glow illuminates the centre of the maze. The entrance is guarded by an Attack O Lantern, a spider-pumpkin hybrid that vomits spiders and has a fearsome bite. Parcival, wielding the great bearded axe for the first time, accidentally lets it fly from his hands, deep into the maze. (Doh, a critical failure, he rolled a 1 on the attack!)

The child with them tells his friends are in the maze and that they aren’t acting the same ever since they ate some of the pumpkins. Trevor and Scumtongue stay back to guard the kid.

In the maze they encounter a small girl, who has a jack ‘o lantern over his head, that spits thousands of seeds at the party. Using non-lethal force they break off the pumpkin that was controlling her and rescue her from the evil that is perverting the maze. Ogg takes her back to the start of the maze where the other child is. They can hear someone making an incantation from the middle of the maze and the orange glow increases…

Hacking their way through the wild pumpkin growth, they make their way to the centre of the maze to find a small boy in a tattered blue cloak, surrounded by large pumpkins and vines, arms raised, he screams maniacally, “I’ve done it. They made fun of me, but who’s laughing now?!? I’ve finally summoned the spirit of the great pumpkin himself!”

All the pumpkins surrounding him, coalesce into a massive pumpkin demon. Flame and darkness are his eyes and mouth, pumpkins and vines make up his body, and he attacks.

Lillyleaf gets encased in vomited pumpkin pulp, unable to break free. Gwendolyn and Luecosia are swallowed whole, devoured and sent to the realm the great pumpkin came from. Joined by Ogg, the rest of the parties attacks aren’t having much effect so Parcival tries a desperate move in this losing battle – he uses the cursed amulet given to him at the start of the adventure with the command word that was whispered to him before the last user burst into flames. Luckily, the magic is controllable this time, and a massive burst of eldritch flame shoots forth (500 ft long!) blasting out huge chunks of the pumpkin demon. Leaping off the hedge maze, Raven delivers the killing blow with his mace, and the pumpkin demon explodes, sending seeds and pulp everywhere.

The glow fades, the boy in the blue cloak passes out, and calm comes to the maze.